Between Drifts is a new acoustic duo based in the Gunnison Valley of Colorado. We are Dave Pinkerton and John Bocchino. We’ve been playing together along with other musicians here for a few years, and we’re very excited to play as a duo now and perform locally.

Dave plays banjo and has really blazed his own trail with his instrument. He adds a very interesting mix to songs where you might not expect to hear a banjo. Dave also provides lead vocals and sings harmony. John plays guitar and harmonica, and also sings. We have both written original songs, and we have really enjoyed collaborating on our original work as well as interesting covers of well known tunes. We play a variety of music including bluegrass, folk, blues, American roots, and crossover music that blurs the lines. Some refer to this style in general as Americana, though it’s difficult to put a single label on so many genres. We’re looking forward to further developing our sound and our mix of music. We invite you on our musical journey and hope you’ll come along for the ride! 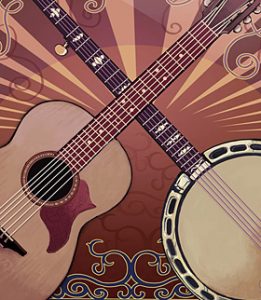